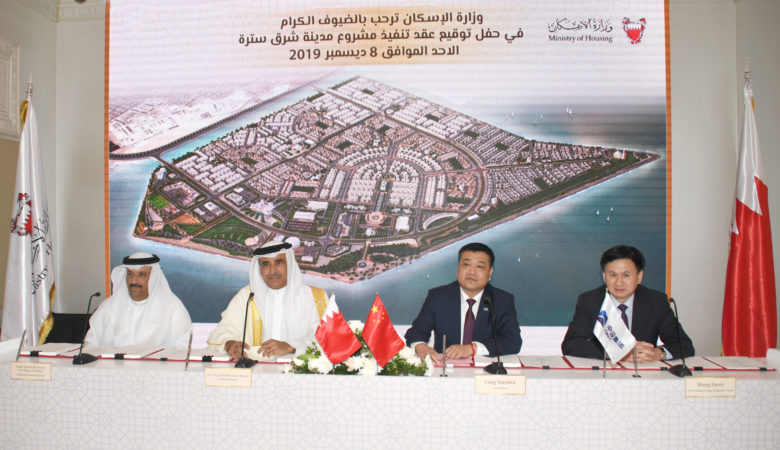 Bahrain joined China’s Belt and Road Initiative (BRI) when the Ministry of Housing formally signed a BD260m ($690m) deal on 8 December with Beijing-based China Machinery Engineering Corporation (CMEC) for the construction of more than 3,000 housing units at East Sitra.

The deal is the first major construction contract secured by a Chinese contractor in Bahrain and comes with financing. “The total construction time is 72 months, and the financing will go up to seven years,” Minister of Housing, Basim bin Yacob al-Hamar, told MEED after the contract signing.

The East Sitra construction deal is the culmination of efforts that began following King Hamad bin Isa al-Khalifa’s visit to China in 2013. “After his majesty’s visit in late 2013 to China, where both leaders agreed to strengthen business ties, there was a focus on the housing sector at that time. They both agreed they can support Bahrain in building houses,” said Al-Hamar.

“I was then directed to travel to China and, in 2014, I met all the international Chinese contractors,” said Al-Hamar. “We subsequently extended an official invitation to participate in one of our megaprojects or new towns; we then went for tender, and the signing today is the result of this process.”

Bahrain’s tender board has flexibility that allows government bodies to procure goods and services from a specific country. “We have three tender categories: single source, limited tender and open tender, and the East Sitra tender was limited to Chinese contractors,” said Al-Hamar, who is also the chairman of the Kingdom of Bahrain Tender Board.

The East Sitra project is one of five new towns that Bahrain is building. “We have Sheikh Khalifa Town; Sheikh Salman Town; East Hidd; Al-Ramlee district, which is equivalent to a new town and will accommodate almost 3,500 units – the first phase of 1,200 units is likely to be handed over by 18 or 19 December; and East Sitra is the fifth town,” said Al-Hamer. “We have almost managed to fulfill his majesty’s directives of building 40,000 units, taking under consideration that these developments will together accommodate 55,000 units.”

To meet Bahrain’s housing demands in the future, the Ministry of Housing is looking to work with the private sector. “With the change in the economic environment recently, we have been receiving an influx of interest from developers and investors from the GCC and America,” said Al-Hamer. “The change in the economic environment is helping us get wider exposure to developers and better deals.”