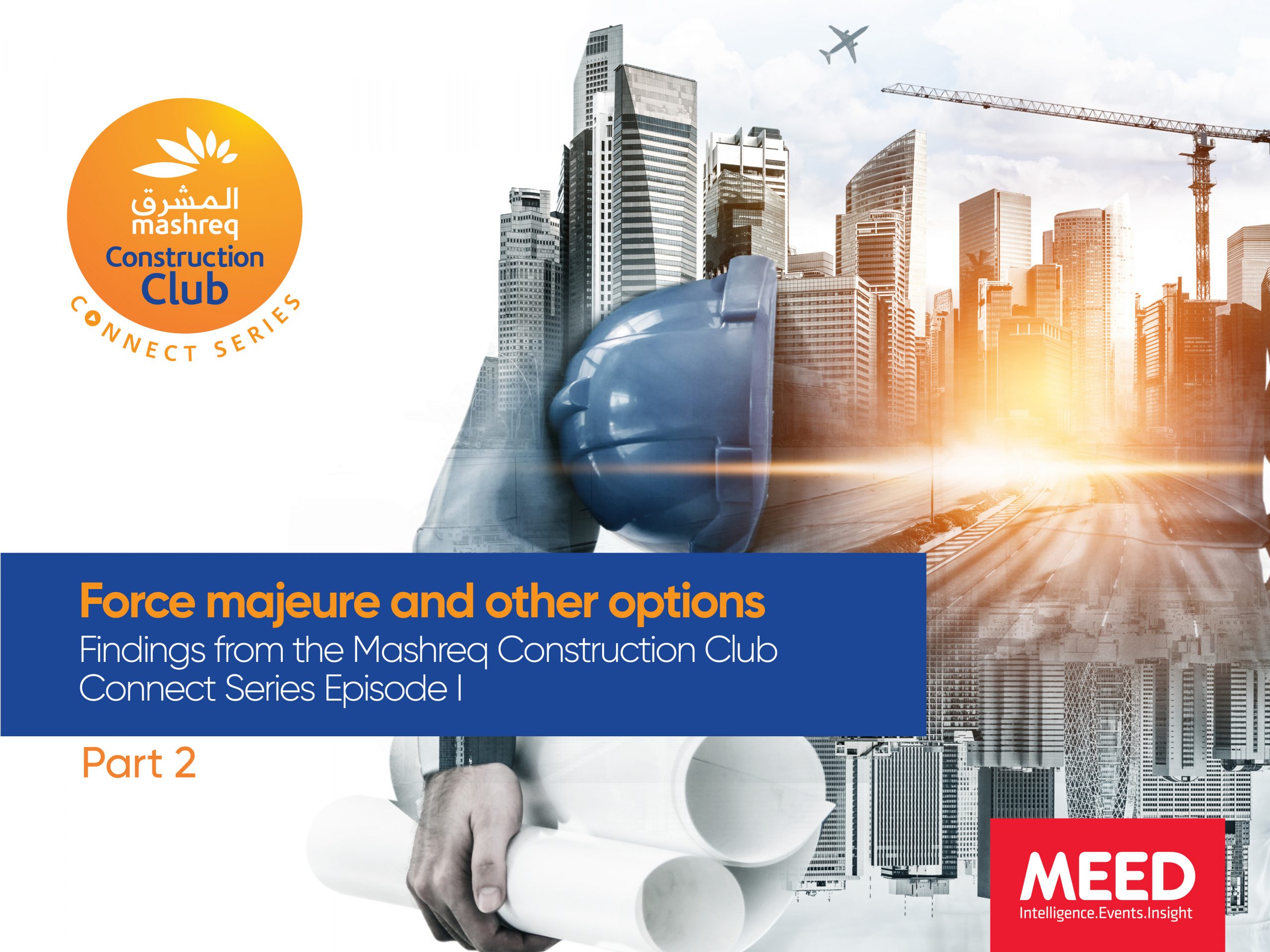 On 16 April, the Mashreq Construction Club launched the Connect series of webinars aimed at providing construction companies in the UAE with direct access to expert insights that will help them navigate the unexpected challenges that have suddenly emerged out of the Covid-19 pandemic.

Find the first part of this summary here

According to Clyde & Co construction partner Michael Grose, it is common in the UAE to have construction contracts that have been amended from the standard forms of contract defined by the Fidic suite of books. But it is also possible, he says, to come across situations where standard Fidic clauses are unamended but the applicable laws could introduce additional rights or amend those set out in the contract.

How would the impact of Covid-19 be measured in these situations?

The UAE Civil Code or the onshore law has provisions that explicitly deal with force majeure and impossibility. The most relevant provisions are articles 273, 472 and 893.

Grose says that the UAE Civil Code contains nearly one dozen mandatory provisions that overrule anything that parties agreed upon, such as the right to adjust liquidated damages (Article 390).

The force majeure clauses are not listed as mandatory. However, the underlying principle of mandatory civil code provisions is that they operate in public interest.

Additionally, any gaps left behind by deletion or amendment of clauses – such as the Fidic 1999 Clause 19 – will be filled by the civil code.

Find the first part of this summary here

The UAE Civil code is not the only source of law in the UAE. The legal framework of Dubai International Financial Centre (DIFC) and Abu Dhabi Global Market (ADGM) operates independently of the civil code.

DIFC law is applicable to most of the commercial activity within its geographical boundaries and for contracts that choose to apply it.

In case the DIFC law does not deal with a particular situation, it resorts to English law as the backup.

DIFC’s contract law is codified in Law Number 6 of 2004, which defines force majeure under Article 82, unlike English law which does not have a specific concept for force majeure. The closest concept in English law is frustration, which is too narrowly defined for parties seeking release from certain obligations due to unforeseeable circumstances.

Article 82 states that “non-performance by a party is excused if that party proves that the non-performance was due to an impediment beyond its control and that it could not reasonably be expected to have taken the impediment into account at the time of the conclusion of the contract or to have avoided or overcome it or its consequences”.

ADGM has a different legal system but broadly takes a similar position as the DIFC law. However, contract law is not codified in ADGM and the position defaults to English law.

As with contractual provisions, the provisions stated above are also open to interpretations and application, with the outcome dependent on the forum in which a party finds itself disputing the impact of Covid-19.

The advantage of courts both onshore and in financial freezones, says Grose, is that they have experience in dealing with similar circumstances, such as periods of inflation or recession.

While situations requiring courts to rule on an epidemic or pandemic have been rare, they will rely on four key tests to determine whether force majeure or impossibility applies. The event should be:

The final test is difficult to ascertain, says Grose.

Impossibility can be applied either to the entirety of the contract or individual components.

Somewhere in between, says Grose, it ceases to be impossible to perform a contract based on the current situation. Application of the impossibility test will determine what the courts are likely to do.

Parties filing a claim can expect a more sympathetic response from arbitrators, as long the claim demonstrates the link between the current pandemic and the relief being sought (time or cost).