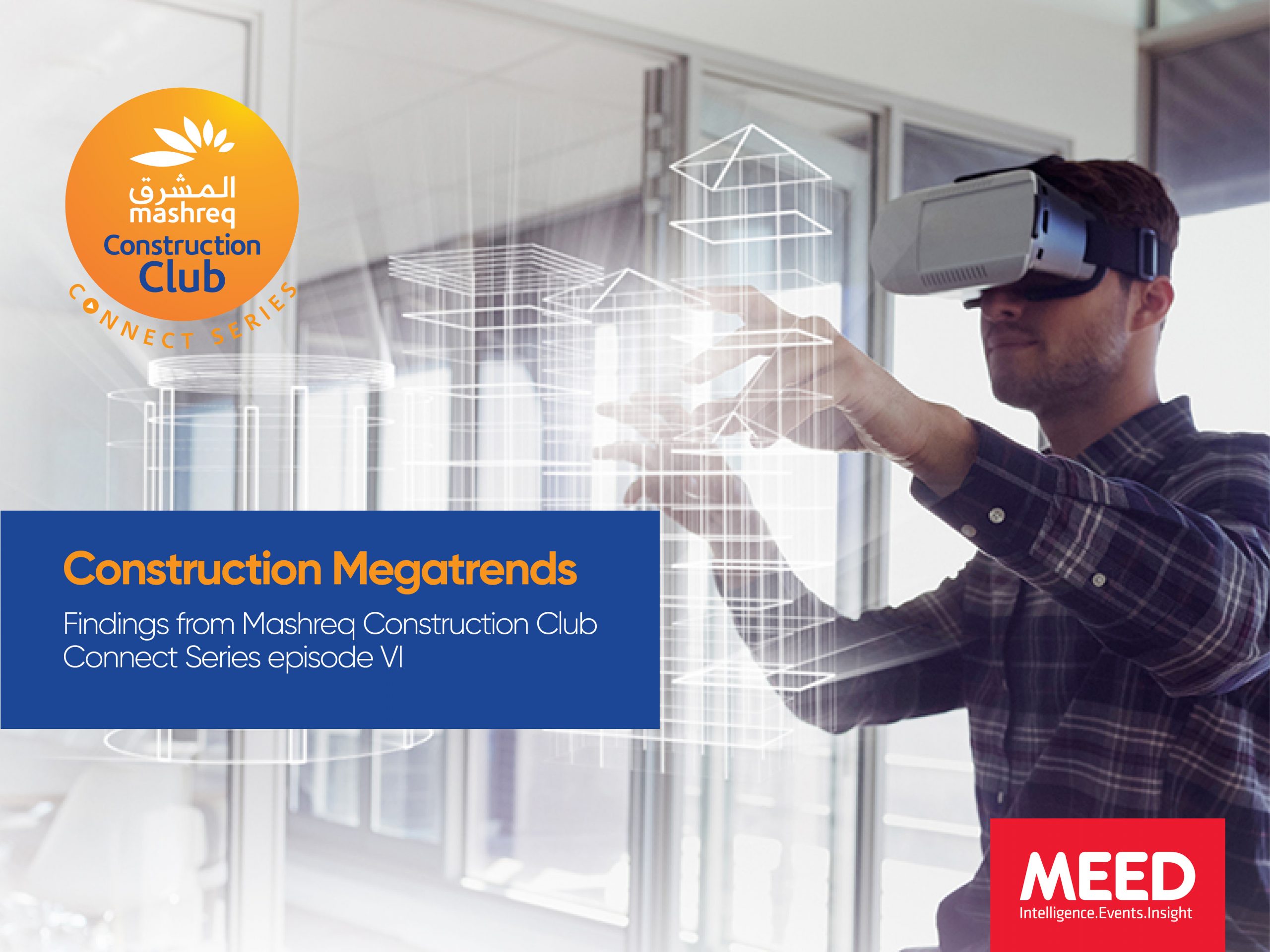 A hub between Europe, Asia and Africa, with vast hydrocarbons and financial wealth, and an appetite for innovation, the GCC region is well set to continue enjoying rapid economic expansion for the coming decade and more.

But after 20 years of growth driven by huge capital spending on iconic megaprojects, rising real estate demand and investment in infrastructure, the Gulf’s future development will be shaped by the need for greater energy efficiency, happier societies and lower carbon dioxide emissions.

As a consequence, the drivers of construction in the region’s next phase of development will be very different to what came before, and governments and businesses must adapt to meet the new opportunities. They must learn new skills, embrace new technologies, and find new ways of working that foster collaboration and sustainability.

The sixth edition of the Mashreq Construction Club Connect Series of live webinars examined what the most significant drivers of future construction in the Gulf would be, and how they will shape the region’s construction industry.

Highlights from the webinar

Climate change emerged as one of the biggest drivers, and disruptor, of the region’s construction industry, shaping everything from building design through to materials specification.

Gulf construction’s oversized carbon footprint, culture of sending waste material to landfill, and dependence on ‘dirty’ materials such as cement, which has very high levels of carbon dioxide emissions from its production reflect an industry that has to undergo substantial changes in order to contribute to global sustainability.

Cindric says that inefficient building practices and a lack of investment in alternative materials all contribute to the region’s poor performance in environmental sustainability. He says that unregulated materials production, including ‘sand piratism’, contribute to the problem. And that the construction industry contributes nearly 30 per cent of all waste sent to landfills in the Middle East.

Cindric says that construction companies, designers and developers must reshape their process to create a ‘circular economy’ in construction where waste materials are recycled and reused. He says that this is already starting to happen, through experimental projects such as one to reuse the salt and sludge created by water desalination to make bricks.

New technologies such as blockchain and digital twins will be vital components in developing a circular construction economy by ensuring that owners are able to track materials through the life cycle of a project.

A connected trend that is set to change the construction market is the region’s drive for greater energy efficiency through cleaner sources of production and reduced consumption through technological innovation.

“There are talks around combining cement production with carbon capture and storage,” says Heriot watt’s Professor Ludden. “Plus, recycling and using different materials is also an important step that can help tackle the waste problem.”

The UAE is playing a leading role in advancing large-scale clean energy. Driven by initiatives such as the UAE Energy Strategy 2050, the UAE aims to increase the contribution of clean energy in the country’s energy supply mix to 50 per cent by 2050 and reduce its carbon footprint from power generation by 70 percent.

Currently, solar power accounts for 7 per cent of Dubai’s total power capacity and nearly 6 per cent in Abu Dhabi. Natural gas-fired power plants account for the majority of power generation in the UAE.

Ludden says that the UAE has the opportunity to demonstrate the value of technologies in the energy and climate change sphere.

“What makes this target even more interesting is the arrival of nuclear,” he says. “The Barakah nuclear station is predicted to meet 12 per cent of the UAE’s power needs by 2030. The UAE is one of the few countries not just regionally but in the world embracing nuclear.”

Ludden says that nuclear energy is an ideal source to provide a reliable base load of electricity that will complement the intermittent supply from sources such as solar and wind.

Ludden also says that the UAE is well placed to work with international partners and innovators to produce pilots for pioneering future energy sources such as hydrogen fuel.

Around the world, construction has long-been characterised by its failure to innovate and invest in research & development (R&D).

As a result, the construction industry today is one of the world’s least digitalised industries, second only to agriculture. Despite this, construction lags behind agriculture in terms of increasing efficiency.  The agricultural sector has reported to have seen its productivity levels improve by nearly 16 times the gains made in construction over the past 50 years.

“This is where construction can learn from manufacturing,” says ACC director Rasheed Mikati. “We need to make greater use of pre-manufactured materials. But at the same time, the design also needs to change to allow for great use of modular, prefabricated processes.”

But Mikati says that ensuring the adoption of these practices requires governments and clients to provide a long-term road map for project spending in order to justify construction industry investment in innovation.

Greater adoption of building information modelling (BIM) and ‘digital twins’ will alleviate many of the productivity challenges facing the industry, says Ludden,  by reducing design clashes and other construction issues even before a project goes to site.

A fourth key trends that is set to change the construction industry is the need to make the region’s cities function better.

The Middle East has some of the highest urbanisation rates globally, says Cindric, who says the region’s current population composition is similar to that seen in Europe and North America after the Second World War.

“One of the big issues I have seen in the region, which has been exacerbated by Covid-19, is the quality of life, spaces and cities,” says Cindric. “Spaces are being built to just accommodate people, with little thought given to the use and layout – a sprawl model.”

Cindric says there is a growing trend towards more focus on the efficient use of space that put the needs of the residents at the heart of the development.

One consequence of this, he says, is that we can expect to see a rise in brownfield developments, with greater focus on retrofitting and energy efficient structures.

A key factor in improving the use of space, is improving transportation networks, says Cindric.

Integrated infrastructure such as railway networks are becoming increasingly critical to connect the region’s sprawling cities.

“The catalytic effect that something like [a railway network] can have is impressive,” says Cindric. “Infrastructure investments will pay-off in the long run by providing greater connectivity for goods, services and people. The cost benefit analysis will highlight how much traffic is taken off roads, how pollution is reduced – even how health impact is increased because people choose to walk a bit more [to the nearest station].”

A dominant demographic trend in the Middle East is the rise in the region’s youth population.

According to UNICEF, children and youth (0-24 year olds) account for nearly half of the Mena region’s population. Meeting the needs and unlocking the potential of the region’s youth bulge requires urgent and significant investment to create opportunities.

The shift from West to East

The growing economic strength of the Asian economies is creating new trade and investment opportunities on which Middle East governments and companies can capitalise. But for construction companies in the region, it means increased competition.

ACC’s Mikati says that while the majority of contractors for local projects will continue to be regional, competition is coming in from Asian markets.

“About 15 years ago, we had a lot of contractors come in, especially in oil and gas, and they were from Korea,” notes Mikati. “They made an impact on the market. More recently, we see a rise in Chinese contractors in the power and desalination sectors, as well as the building sector. Solar projects are seeing a lot of Indian contractors.

“Some of the Chinese contractors are also coming in with financing, which ties in with the project finance megatrend of export finance.”

Infrastructure is critical for the Middle East’s rapidly expanding economies in the Middle East and the majority of the schemes in the region are typically funded by government spending. This is no longer sustainable.

“The government cannot fund the big gap in infrastructure requirements,” says Linn. ”And there is a need to bring in alternative financing, which makes public private partnerships (PPP) essential.”

“There are risks,” he says, “and it is costly upfront. But the long-term effectiveness of delivery and performance is something public sector will struggle with on its own – private sector firms can bring in a lot of innovation.”

Involving the private sector in these schemes can help narrow this gap, while also improving collaboration between government and private entities.

Linn stresses on the need for greater collaboration in the industry as well as building greater workforce capacity and capability.

Mikati says that the UAE’s construction firms have amassed abundant skills and expertise over the past two decades from delivering world-scale projects in the region. He says that, as new markets emerge outside the region, UAE companies have the opportunity and hold the necessary expertise to expand to other markets such as Saudi Arabia, India, Egypt and Africa.

To successfully export UAE construction however, he says, UAE companies must overcome the challenges of increasing localisation policies in the region.

“There are in-country value (ICV) systems in the UAE and in-kingdom total value added (IKTVA) in Saudi Arabia,” says Mikati. “This might slow down movement across borders, increasing pressure on companies to set up local subsidiaries and thus drive local employment.”