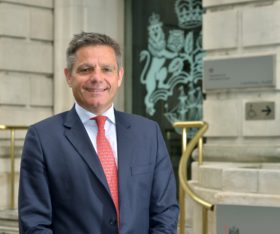 The Middle East remains a primary focus for UK Export Finance (UKEF) says Simon Penney, Her Majesty’s Trade Commissioner (HMTC) for the Middle East, Afghanistan and Pakistan (MEAP), adding that steps are being taken to give UK businesses greater access to trade deals in the region.

“The Middle East as a region benefits from the most appetite in terms of country limits for UK Export Finance, and within that, it is not surprising that it is the UAE that leads the way. We have got in total for the UAE £6bn-7bn of appetite, which is close to $10bn,” says Penney.

In March, the GCC became one of the first regions in the world to have a dedicated UKEF team. Dubai in particular has made use of UKEF for aircraft acquisitions and delivering real estate projects. “We have been extending a fair amount of credit into the Dubai market. We have extended credit into Emirates for the acquisition of Airbuses, into Meraas for a number of their projects – mall projects, theme parks, the Bluewaters project have all received UK finance, and the Dubai Arena that is another Meraas project. We have done stuff with Emaar around housing, so it is fairly broad brush and I guess this why it grabs the headlines a bit.”

While the financing benefits entities in the region, the driver for the financing is to support UK businesses looking for overseas orders. “In some ways it sounds counter intuitive that we are extending financial products to non-UK borrowers, but obviously the requirement of the credit is the minimum spend on UK goods and product export is part of that commitment,” says Penney.

Part of that drive involves making UK companies more aware of the opportunities available in the Middle East. “We are becoming a lot more joined up in what we do. Saudi Aramco is another entity that we have offered a fairly significant facility to and what we are doing with Aramco and other borrowers is taking them to the UK on a meet the buyer roadshow where the buyer comes to the event and we invite a whole cross section of the UK supply chain that would potentially be interested in supplying goods and services,” says Penney. “It is not just a case of deploying capital and then taking a step back. It is becoming a lot more involved in matching the buyer to the UK exporter.”

The UK scrutinises the entities that it extends finance to in the same way that commercial banks do. “It boils down to credit risk ultimately. We go through the same process that any lender or provider of capital would in determining the underlying credit risk of the borrower,” says Penney.

Other financial institutions are involved in deals due to OECD limits that cap export credit at 85 per cent of a deal. “We only provide a maximum up 85 per cent of the contract value, so there is still a requirement for a borrower to source a minimum of 15 per cent of the contract value from other sources,” says Penney. “Typically that will be from commercial banks as well, so it is very much the same process you would expect to see in the commercial environment.”